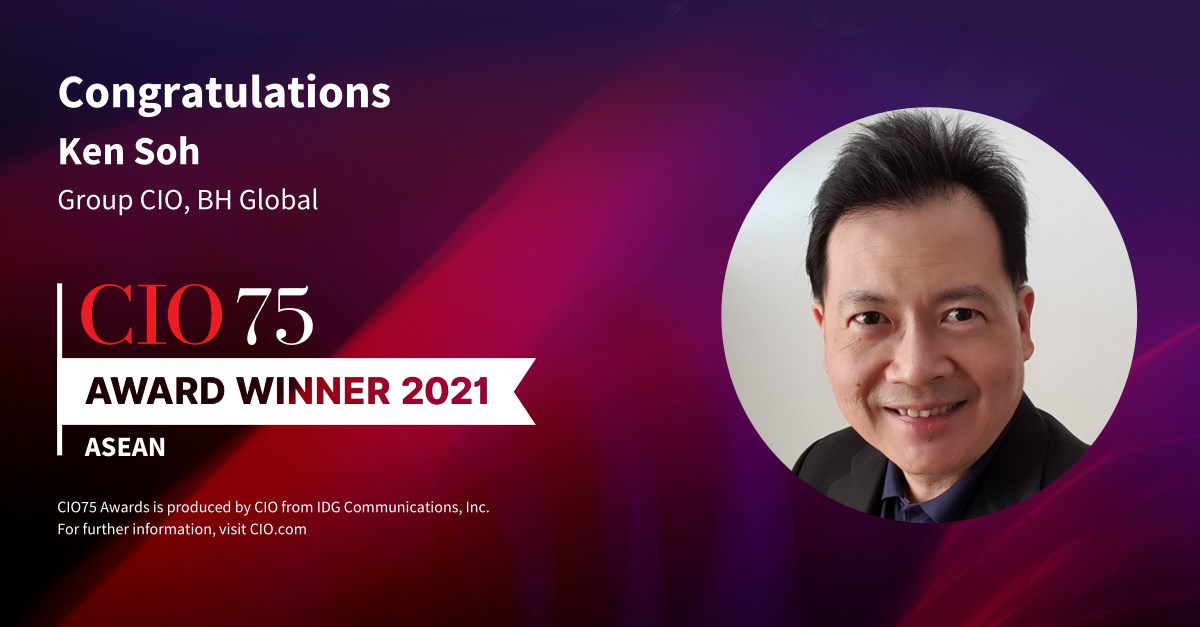 CIO75 is aligned to IDG’s global awards program and viewed as a mark of excellence within the enterprise. The awards registered a record year in 2021 with more than 150 nominations submitted, over 20 industry sectors on show and eight markets represented – spanning Singapore, Malaysia, Indonesia, Thailand, Philippines, Vietnam, Hong Kong and Myanmar.

“Congratulations Ken Soh on your recognition in CIO75 across Southeast Asia and Hong Kong,” said James Henderson, Editorial Director of Asia Pacific at CIO. “CIO75 is not only a true representation of the regional market but a true illustration of the outstanding achievements delivered by individuals, wider teams and entire organisations.

some of which have been in place for more than 18 months – while battling some of the worst outbreaks of infections and encountering the most devastating societal and economic implications in the process.

“Yet this is a market which presses on unperturbed, raising the bar for industry excellence through the deployment of bleeding-edge technologies and enhanced business models. Two words perfectly illustrates the DNA of the CIO75 in 2021 – tough and transformative in equal measure.”

“Enormous credit to the market-leading CIOs continuing to press ahead in innovating at pace – despite the notable difficulties – which once again demonstrates the depth of transformation taking place across the region. Congratulations Ken Soh, nothing can stop your pursuit of excellence.”

Such work also cements CIO75 ASEAN as the leading awards program for technology leaders in the region, forming part of a broader Asia Pacific initiative alongside the CIO50 Australia, CIO50 New Zealand and CIO100 India awards. These are in addition to CIO100 awards in the US and UK, plus the recent launch of CIO50 Middle East awards.

Winners were unveiled during a celebration ceremony hosted virtually and attended by more than 300 technology executives from across the region.

In 2021, CIO75 was judged on the core pillars of Innovation and Leadership, honouring transformational, inspiring, and enduring CIOs at both in-country and regional levels within Southeast Asia and Hong Kong.

All entries were reviewed by a select and independent CIO75 judging panel, who rated each section of the questionnaire to determine the final list. The most powerful nominations provided real-world examples of where technology and digital chiefs are successfully providing value to organisations, driving innovation and leading teams.

CIO congratulates all CIO75 winners and finalists in 2021.